Choosing an EV – when you live in a flat 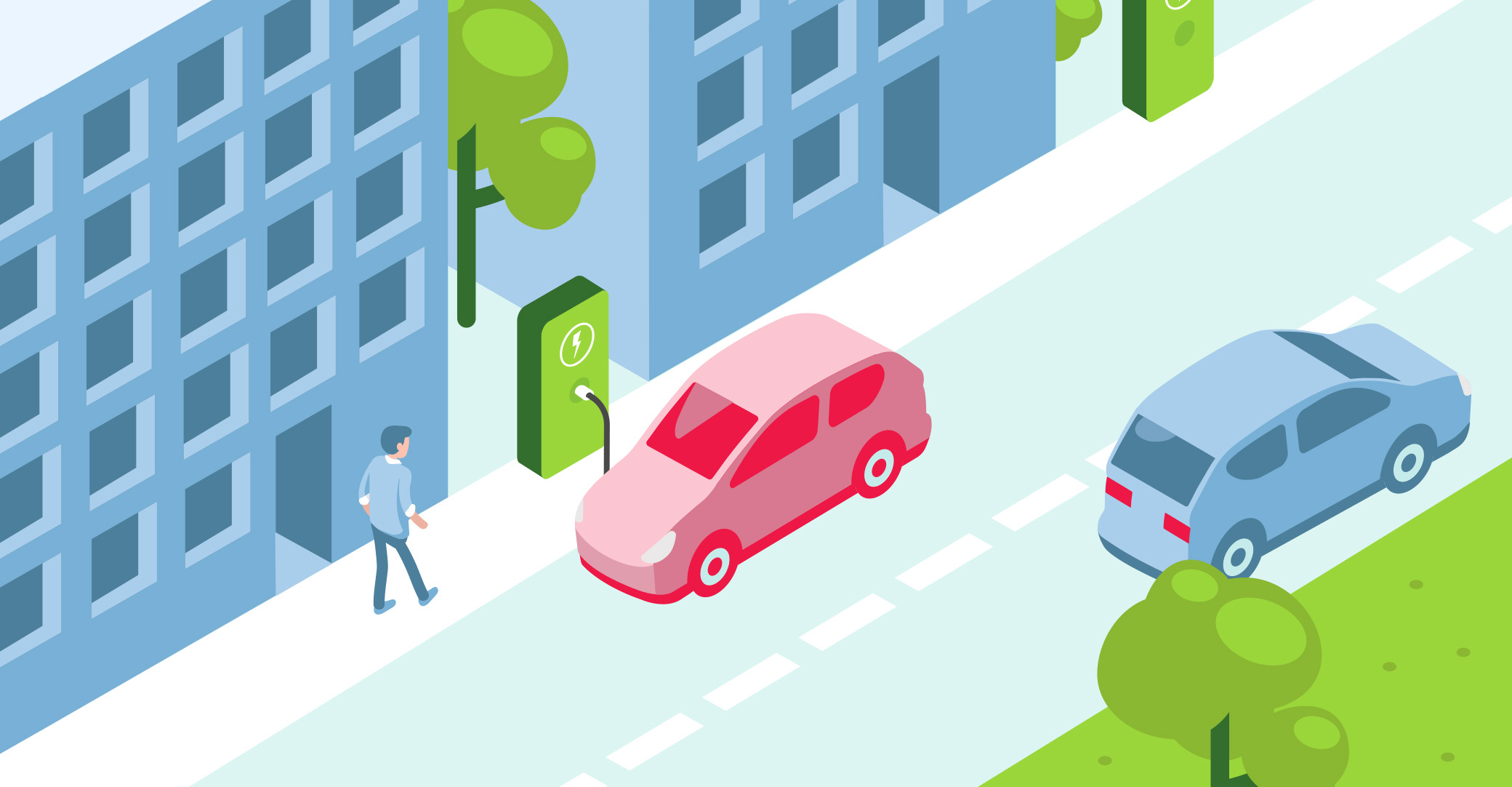 If you live in an apartment, or perhaps a block of flats with shared parking, choosing an EV might seem an unlikely idea. It’s a compromise, but it’s not insurmountable.

In the latest Zap-Map survey of EV users, 85% of respondents used home charging. So, unless there are charge points provided – which is unlikely – you will be reliant on public points to recharge your EV.

So what are your vehicle choices?

The easy option is to suggest self-charging hybrids since these vehicles never require plugging in, just a trip to the fuel filling station.

However, business users miss out on significant taxation advantages while all drivers would fail to benefit from the reduced running costs of plug-in hybrids or fully electric vehicles.

The impact on local air quality is greater too, even though many new hybrids can run for short periods on battery power alone.

So while self-charging hybrids are a solution of sorts, they are a compromise. Far better to consider a plug-in hybrid (PHEV) or a fully electric vehicle (EV), despite the limitations imposed by where you live.

So where can you go to charge up if you don’t have at-home charging facilities available?

Without a home-based EV charger, you will need to research your location for public charge points. A useful back up may well be a work-based charger. These significantly help plug-in hybrid cars, so that drivers can take full advantage of the vehicle’s zero-emission driving capability, enabling them to commute both to work and back home again on battery power alone thanks to the availability of onsite charging.

A PHEV, because it has a smaller battery, may well be a suitable solution for high-rise or apartment dwellers. The battery can be charged more quickly, and if the worst should happen, there is always the combustion engine to rely upon.

However, what if you don’t have access to a workplace charger? And what if you decide that an EV is right for you? In which case you will need to access the network of publicly available chargers.

The types of public charger 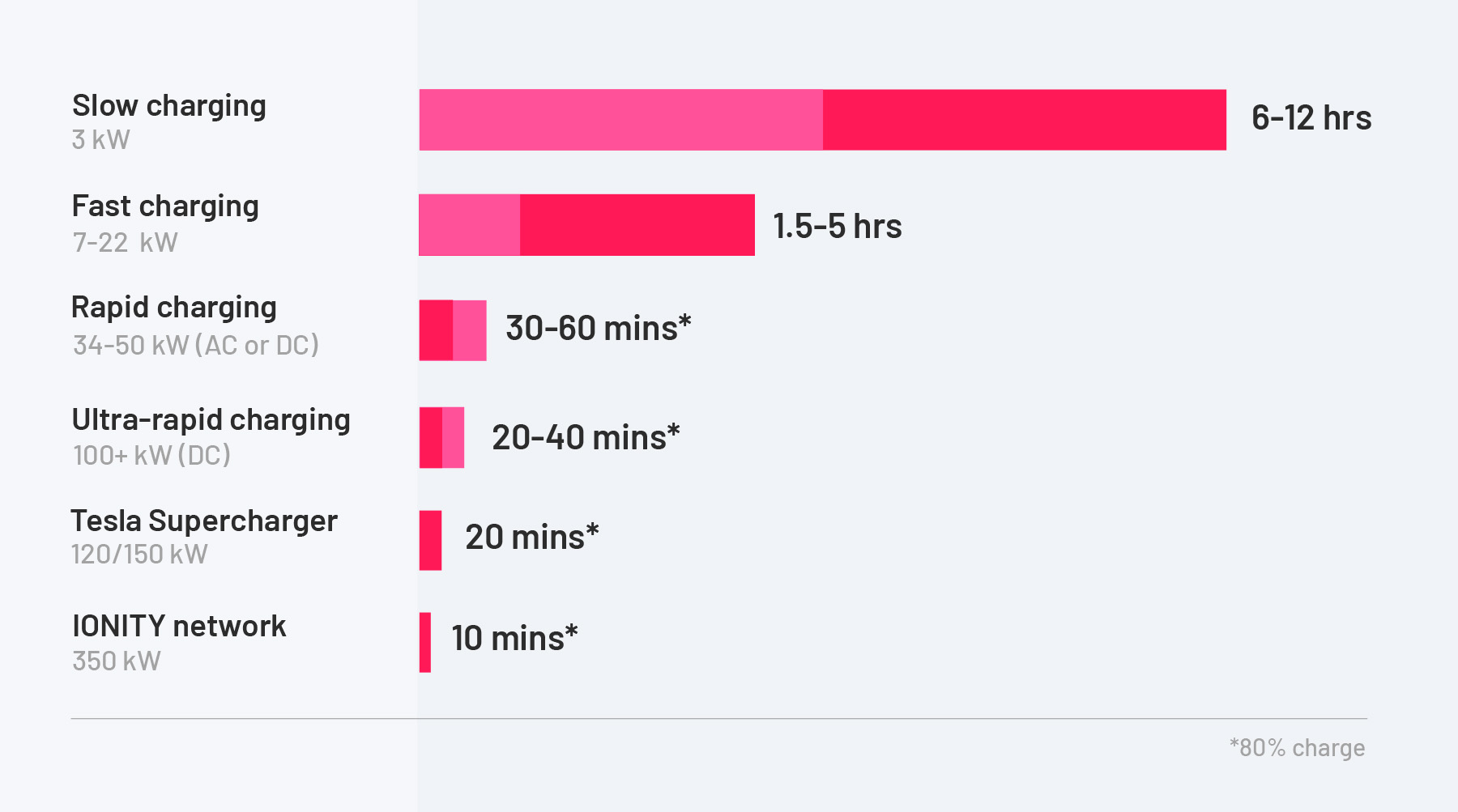 It should be noted that Tesla Superchargers, available on main routes, are only available to Tesla drivers.  The IONITY network, which is a joint venture of the BMW Group, Ford Motor Company, Mercedes Benz AG and Volkswagen Group with Audi and Porsche, is configured around main routes, both in the UK and the continent.

There are a bewildering number of providers, both major (such as BP Pulse – formerly Chargemaster – and its Polar network) and minor (for example Char.gy, which provides chargers for street furniture, such as lampposts).

One of the issues has been the requirement by each network for a user to download an app before charging. However, this is changing rapidly under a government directive to have ‘pay as you go’ facilities that enable simple debit or credit card payment.

Meanwhile, significant new EV charging hubs continue to be built, such as at railway stations, while BP Pulse has opened an eight-charger canopied charging hub in Milton Keynes. Meanwhile in Braintree, Essex, the first of 100 planned electric forecourts from Gridserve has opened with the traditional rows of fuel pumps replaced by 30 EV chargers.

In many ways, then, the choices for EV drivers to charge their vehicles is growing continuously. And will continue to do so.

Equipping yourself with Zap-Map, an online resource showing EV chargers along with status updates, will be essential for those with no at-home charging facilities. The map is downloadable in both Android and iOS formats. It will enable you to plan where you can charge locally and to plan stopover points for longer journeys.

An alternative map is Open Charge, which lists all UK public chargers. Maps offer information about the equipment available, how much the charge will cost, and whether the facility is operational.

Like Zap-Map there are Android and iOS maps for smartphones.

What does it cost to use a public EV charger?

Costs vary depending on location. For example, Scotland has free charging through the ChargePlace Scotland network. Volkswagen is supporting the national roll-out of some 2400 EV chargers at Tesco supermarkets in association with PodPoint. The 7kW fast chargers are free to use, while rapid 22kW or 50kW chargers will be in line with market rates.

Some networks have different tiers of memberships. For example, Polar from BP Pulse has a subscription service called Polar Plus which costs £7.85 a month and thereafter charging at selected Polar outlets is free. Or you can choose Polar Guest which provides instant access and offers rapid charging from 30p per kWh.

Access to IONITY ultra-rapid chargers (up to 350kW) cost £0.69p per kWh, which is costly, but you pay for the convenience of very fast charging.

The key is to understand what is available in your locale and make your choices based on the infrastructure available to you.

Does it really work if you live in an apartment complex?

Well, yes it does, as two Fleet Alliance employees can tell you. Both Marc Murphy and Laura McKechnie live in apartments where there is no charging facility. Marc drives a Tesla Model 3, while Laura drives a VW e-Golf.

Find out what they do to keep their cars charged up. Received opinion says that, in order to drive an EV, you need to have some form of off-street parking so that the car’s battery can be suitably replenished via a home charging unit.

Marc Murphy, though, decided that he was going against received opinion. And he is now gliding silently around in a Tesla Model 3 Performance.

Marc is head of marketing at Fleet Alliance and decided to swap fuel pump for battery charger, saying that a combination of new technology and the environmental benefits of running zero-emission were key to his decision, adding: “It just felt right to be moving in this direction.”

Living in a city apartment in central Glasgow meant Marc had no immediate access to an electric charger. However, the city location actually played into Marc’s hands. He explains:

“Where I live is in close proximity to a couple of on-street chargers but in addition, I’m also only a 10-minute drive to the nearest Tesla Supercharging network. Most of the time I’ve been able to access the on-street chargers without a problem.

“In fact charging my Tesla in Scotland to date has been a problem-free experience. I’ve genuinely had zero range anxiety.”

Marc says his usual routine is to get a 30 minute supercharge every couple of weeks from the Tesla charging station at a cost of between £11 to £14, with the occasional on-street top-up.

There have, however, been a couple of times when it’s not been quite so easy to charge up.

Marc explains: “When I visited Northern Ireland, the lack of charging infrastructure was noticeable, with only one in every three on-street chargers working. Having said that, I always managed to find a charger after a little searching.

“It was also the only place where the charging cable became locked into the charger. However, after a 30-minute call with customer services they were able to release it. Northern Ireland’s infrastructure definitely felt a little less advanced than it is here in Scotland.”

So what advice would Marc give to someone who wanted to go electric but also wanted to continue apartment living?

“I think it’s important to do a little research into the charging infrastructure in your area,” says Marc. “Choosing a Tesla and living close to a supercharging station is an added benefit, so just make sure you’re choosing an EV with the flexibility and battery range your driving requires. But if there are enough public charging options nearby, I’d highly recommend switching to electric.” In the past, the only car Laura would look at was a sporty coupe. After all, her last two cars were both the Volkswagen Scirocco.

But now she’s at the wheel of a Golf. Not a sporting GTI model, but an electric e-Golf. Quite a change, then.

Not so, says Laura, who is a client relationship manager at Fleet Alliance.

“What I like most about the Golf is that it’s so quick off the mark. I’m a bit of a speed freak so I wouldn’t want to be driving a boring car, but I was so-so surprised by the e-Golf. It’s very quick but also really smooth. So I’m not losing anything in the driving experience from my old Scirocco. In fact, I prefer how the electric Golf drives.”

What’s more, Laura doesn’t have access to a home charger. She lives in a flat, and while there is an allocated parking space, so far the management company has been reluctant to allow Laura to install a charge point.

Nevertheless, while this has been a nuisance, it really hasn’t detracted from the ownership experience of the e-Golf. Laura has made charging up the car part of her personal fitness regime.

She says: “There are plenty of public chargers where I live and a rapid charger close by. I cover about 600-700 miles a month so I’m charging the car once every five days or so. It’s encouraged me to park at a fast-charging point and then go for a long hour and a half walk and get my steps up, so it works really well for my personal fitness. When I get back the car is fully charged. If I use the rapid charger that takes about half an hour, I’ll just sit in my car and go through my emails.”

What’s more, so far it has cost Laura not a penny to charge up. Currently, all Charge Scotland chargers in the Glasgow area are free to use.

Laura says that at first, she was a bit anxious about maintaining the car’s battery charge, but since then she has become more relaxed about it.

“People who don’t drive electric cars think they need to be charged up at every opportunity,” she says. “Once you become used to your routine you just relax about the whole thing. I usually run the battery down to about 30 miles range before topping up.”

So what advice would Laura give to someone who lives in a flat without direct access to a charger?

“I would say don’t rule it out. Having an EV doesn’t trouble me because of my driving profile and the availability of charging points. But I understand that might not be the same for everyone. So my advice would be to get on board with the technology – use Zap-Map which shows where chargers are located – and plan your journey. There are chargers all around – you just sometimes have to look for them.

“You’ll be pleased you did it. Whenever I start to complain about charging, I then think of the yearly £3000 saving I’m making in tax and fuel, as well as not having to go into a fuel filling station.

“I certainly wouldn’t go back to a petrol or diesel.

“There’s no valid reason not to go electric.”