Businesses and drivers should embrace the company car 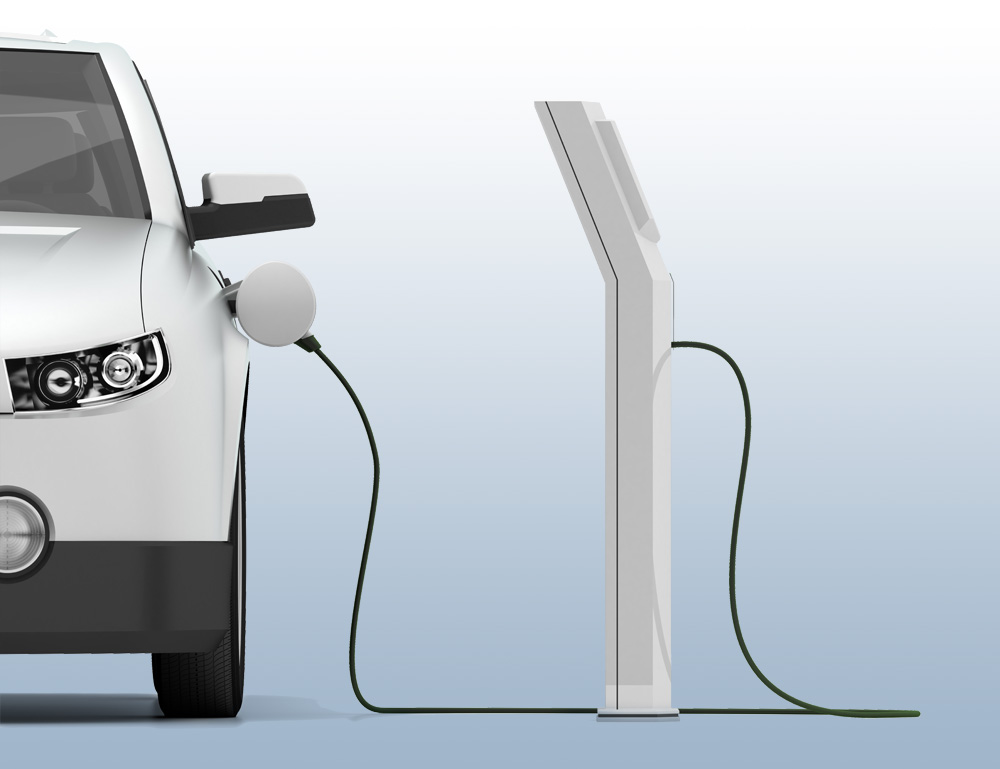 If you, or your company, are considering ditching the company car for a cash allowance or similar, then stop.

The company car has been under attack for a considerable time, commentators chipping away at its value, highlighting a swap into an allowance scheme underpinned by attractive personal contract hire leasing rates balanced against increasingly unattractive benefit in kind rates.

While this argument has had a certain amount of validity, depending on context, moving everything out of the company and onto the shoulders of the driver and loading them with additional lines of credit, should be reassessed.

The climate is changing.

It is changing in terms of the air we breathe. Improving local air quality is central to government at national level, and metropolitan areas at local level. Poor air quality, linked to exhaust pollutants from cars and vans, has a seriously detrimental impact on the health of city and town residents. We probably noticed the difference in air quality during lockdown when there were fewer cars on the road. For example, in the first four weeks of lockdown, nitrogen oxide emissions fell by between 30-50% in several sites measured in London.

Therefore the taxation levels of electric vehicles and plug-in electric hybrid vehicles have been made highly attractive to encourage greater take up of these cleaner vehicles.

Taken in isolation the greater lease rental cost of electric cars does tend to be more expensive than diesel or petrol equivalents, and part of that is down to the use of newer technology.

However, the higher rental costs are offset by the lower operating costs, both for maintenance and fuel, that taken together offer a better operating proposition for the fleet manager and vastly more money in the employee’s monthly salary after tax.

We call this the Total Rental Cost and includes areas such as Class 1A NIC in the calculation. Taken together, we believe fleets and company car drivers that don’t embrace this new climate are missing out significantly.

To make the point, we have put together some examples across a variety of body styles and taxation points to show you the advantages electric cars have as company cars.

The benefits of a blended solution

A blended solution is an equitable outcome for both employer and employee when the rentals of an EV outweigh the provision of a standard grade vehicle. In these cases, where the company car tax benefit is so significantly in the driver’s favour, the employee can sacrifice some of their tax saving against the balance of the EV’s greater rental.

It’s very simple for payroll to set up and provides the desired outcome for the driver and the business.

Here’s an interesting comparison that, on the face of it, looks hopelessly one-sided in the petrol Corsa’s favour. After all, it costs virtually half the price, matched by a rental that is over £80 per month cheaper.

But when you run through the actual costs there is no difference in the running costs: 0.22p plays 0.22p.

But look at the difference in benefit in kind the driver pays. It’s over £3,000 more for choosing the petrol Corsa. Who would want to choose a petrol car with those BIK savings? 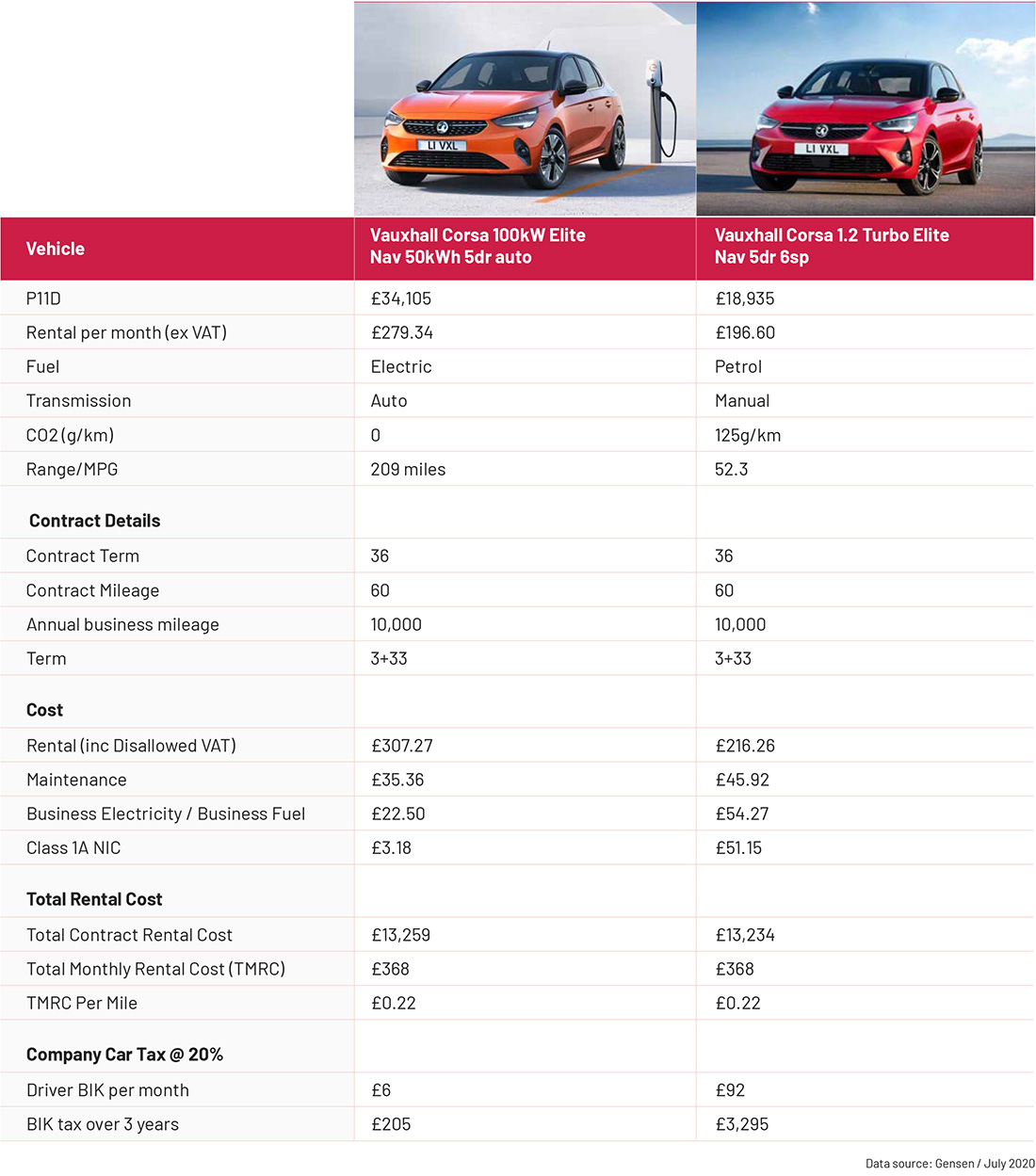 Once more we have an electric hatch versus a petrol hatch, but in this illustration the P11D difference is not so wide in the petrol car’s favour.

That is something reflected in the monthly headline rental where the electric car is just £14 more per month. However, the Total Monthly Rental Cost is very different, with the electric MINI coming out cheaper by £100 per month. Again this is due to the reduced costs of running electric, the cheaper maintenance and the lower NIC.

What is more dramatic is the difference in BIK taxation for the driver. The petrol MINI costs over £4,000 more in tax over the three years. 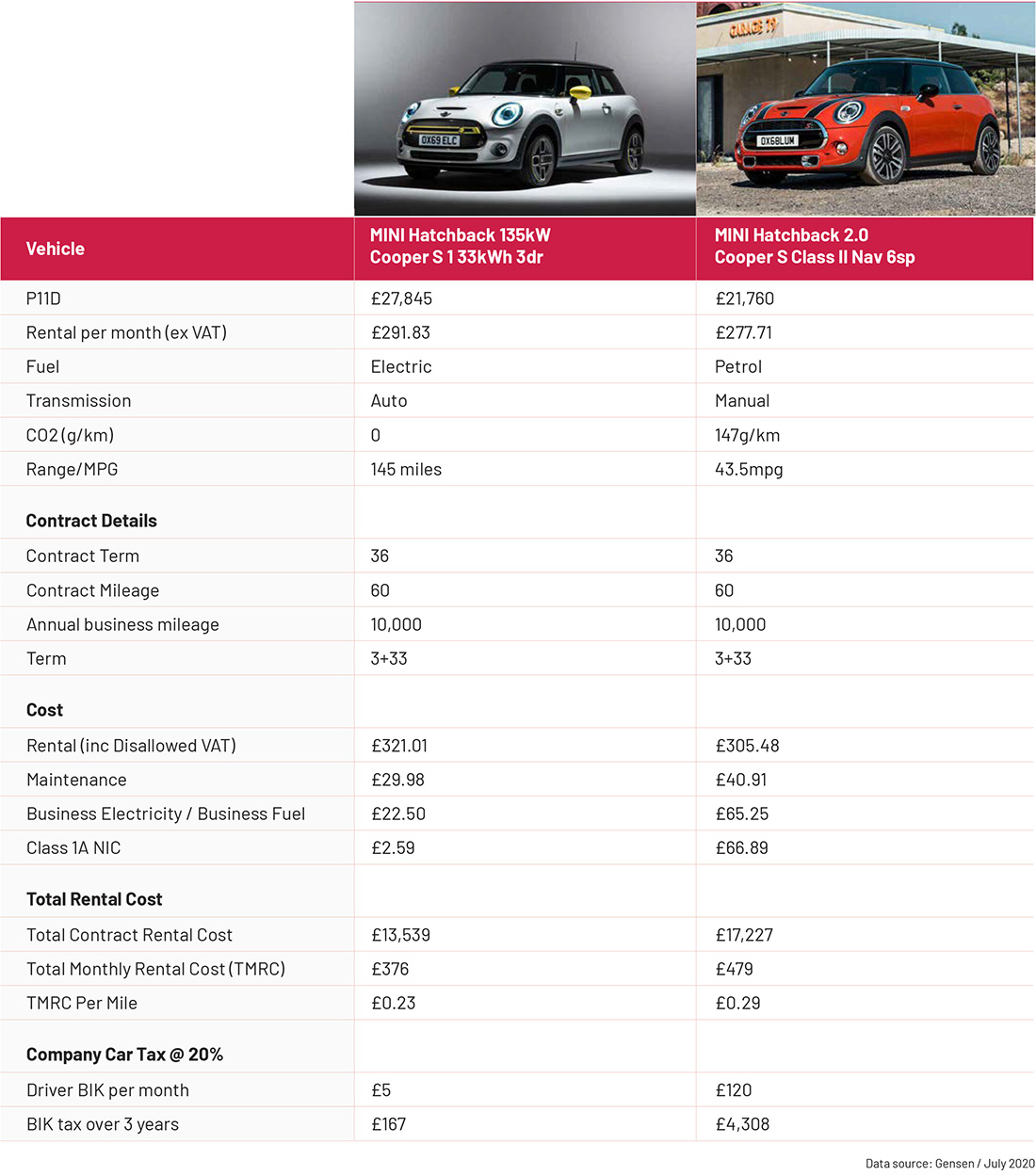 Hyundai was the first manufacturer to offer the same car – the Ioniq hatch – with three different drivetrains: hybrid, plug-in electric hybrid; and fully electric. The Kona SUV benefits from the same choice and while the hybrid might be appealing for those that are wary of charging a car (you still have to visit the fuel filling station, though) we would suggest the EV is the correct company car choice.

And we say that even if the Kona electric costs slightly more per month to run because the BIK difference is so overwhelmingly in favour of the electric car. (In this case run for a 40% tax payer.)

In this instance the Kona Hybrid driver pays nearly £8000 more in tax than if they had chosen the EV. What we would suggest in this instance to the fleet manager is that they take a blended solution, where some of the driver’s tax saving is used via salary sacrifice to offset the greater rental of the Kona EV. 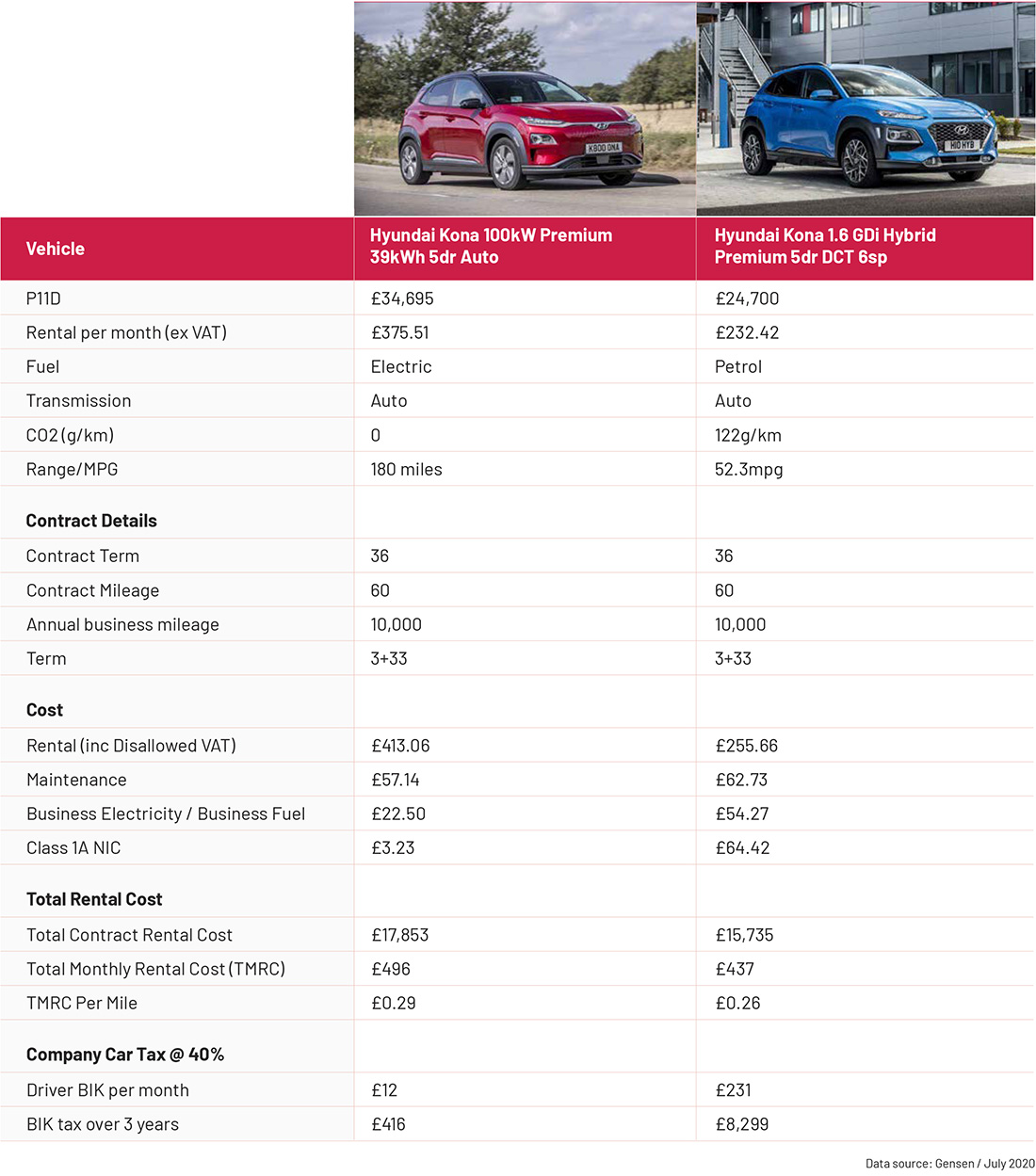 While the e-tron has a range of 189 miles, the Q5 PHEV has an electric only range of 26 miles. While the latter is at the lower end of expectations, it should be enough for the average commute to work.

So how do they compare?

In total rental costs, the Q5 is the winner by £50 a month. Nevertheless, once more the BIK saving by choosing the fully electric e-tron is compelling at over £8,500 across the three years.

As with the Hyundai Kona, we would suggest a blended approach where part of the driver BIK saving is sacrificed for the shortfall in the Total Monthly Rental Cost. 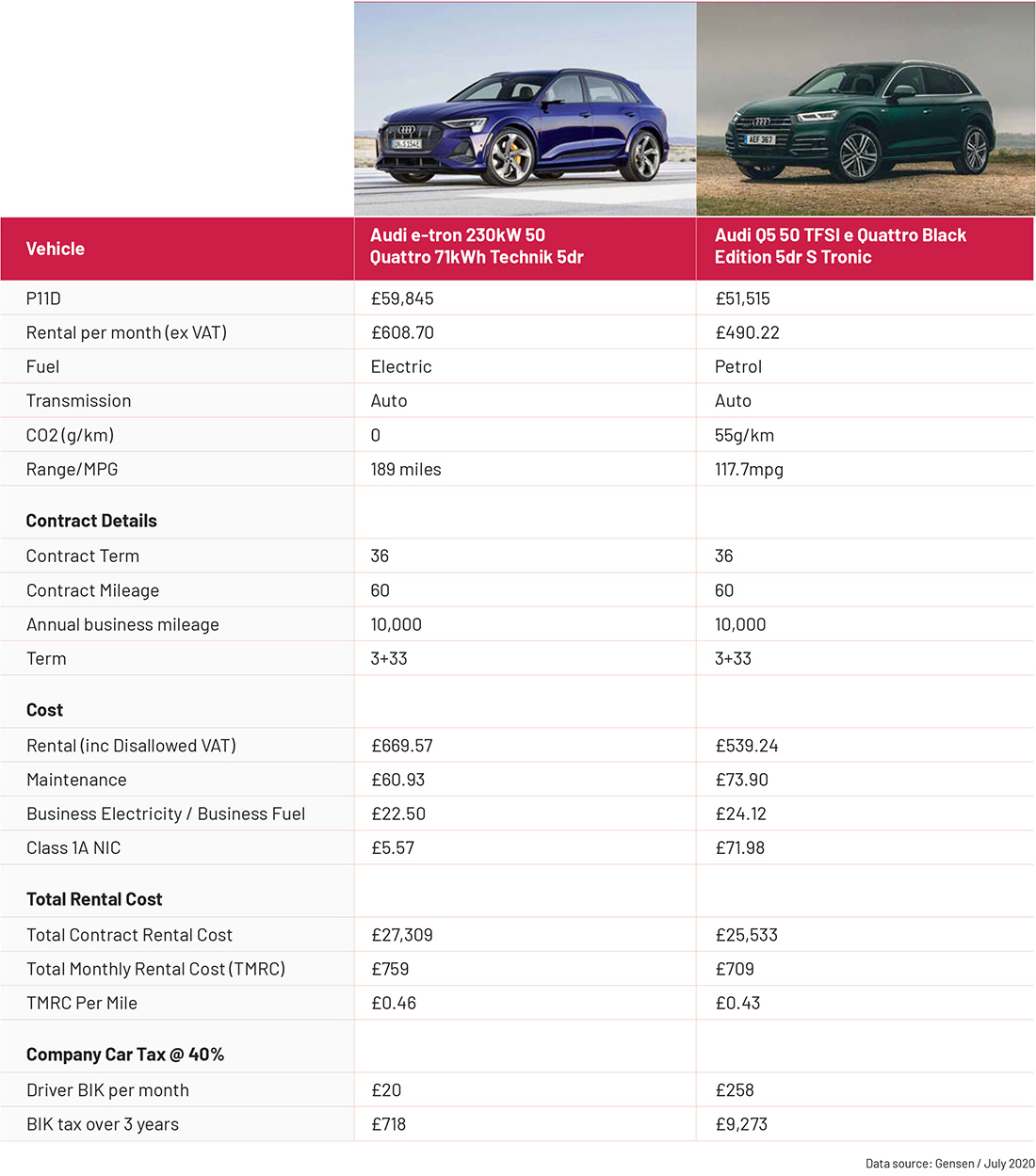 The changes made to benefit in kind taxation from April 2020 require fleets and businesses to reconsider their vehicle provision policies.

From fleet manager, company executive to company director the company car is a compelling proposition as long as it is electric – either fully electric to realise all the tax benefits or plug-in electric.

Fully financed by the business, a company car takes the strain off employee credit lines, while providing the company with a vehicle they can fully audit for health and safety requirements.

There are significant cost savings or cost parity for the employer, a demonstrable commitment to cutting pollution and carbon emissions, and the driver will enjoy substantial BIK savings.

No question the climate is changing – and the company car is the catalyst to help make that change. Businesses and drivers should embrace the company car.