In my last blog – Green – what does it mean? – I talked about the issue of mobility and how it will relate to fleets in the future.

Over in Germany, there’s been an exhibition examining just that. Called IAA Mobility 2021, it was based in Munich and featured everything from the latest in micro mobility to futuristic concepts of what we will be driving.

There was even a ‘Blue lane’ for connecting Munich central with the exhibition area, allowing visitors to test drive a variety of electric vehicles, electric bikes and micro mobility solutions. Or you could just take the tram. That gives you an idea of the show’s broad scope.

But I’m going to concentrate on some of the fleet cars you’ll be driving very shortly – or in the near future – along with some intriguing innovations. So here goes.

Your next Mercedes company car – the EQE

Step aside Mercedes E-Class, and put this on your choice lists: the EQE. Slightly bigger than the current E, the new electric executive features a 90kWh battery and reports suggest it’s capable of over 400 miles on a charge. We can’t wait for this one due sometime next year. The smart-looking new-gen fully electric Megane was unveiled at Munich. There are two battery capacities available with a range of up to 292 miles and it’s capable of taking a fast 130 kW charge that can deliver nearly 190 miles of range within 30 minutes.

Not only are there zero emissions with the new Renault Megane, there’s a strong sustainability theme with the car: all upholstery is made out of 100% recycled materials, while 95% of the vehicle will be recycled at the end of its life. Expect to see this in autumn 2022. Talking about sustainability, BMW showed us its idea of how the company could approach sustainability with a concept car called i Vision Circular. Not only is the vehicle made entirely from recycled materials, all components are recyclable, too (hence ‘Circular’ based on circular economy principles and the use of secondary materials). The idea is to reduce the car’s carbon footprint.

At some 4m long, the car is fully electric and offers a foretaste of some new BMW design features, including a reinterpretation of the classic kidney grille. Here’s what a small car might look like in 2025 when Volkswagen will launch its electric supermini. There are certain things that clearly won’t make it into production, such as the zip to take down the roof for alfresco driving, but what’s important to take away from this car is the price. You might have seen car makers complain that current petrol superminis are becoming too expensive to make under new CO2 emission rules. Not Volkswagen: the target price for its electro city car is 20,000 euros (about £17,000). Bring it on Volkswagen. Ah, Ora Cat. Say hello to one of the new Chinese brands I’m sure we’ll get used to in the fleet landscape of the future.

The Cat is made by Ora, a sub-brand of Great Wall (you might recall their pick-ups came to the UK a while back) and it’s coming to the UK with a range of some 250 miles in the first half of 2022. And no doubt a price tag that will be seriously competitive. The Smart company is now a joint venture between Mercedes-Benz parent Daimler and Chinese car maker Geely (owner of Volvo and Polestar). And Smart is now thinking bigger than its current electric two-seater runarounds and wanting a more premium market position – such as this electric SUV shown at Munich. Expect the car to arrive Quarter 1 2023.

It wasn’t all cars, though. Here are some interesting mobility and sustainability highlights I picked up at the show. Navya is a French company offering autonomous rides in its electric shuttle while also demonstrating inductive charging (a pad over which the shuttle sits to charge up rather than plugging in a cable). If this seems a bit remote to you, think again: the Navya shuttle is going into service in the UK on the 700 acre Harwell Science and Innovation Campus in Oxfordshire. It will operate 24/7 around the UK science and technology hub, transporting employees and visitors. It’s the future, but now. Continental showed the future for car tyres – and they are made from rice husks, vegetable oils and natural rubber from dandelions, according to the tyre maker. Called the Conti GreenConcept, the tyre is fitted to a reduced weight wheel, all of which adds up to lower rolling resistance, which in turn means more range in your electric vehicle. What’s more the tread can be renewed again and again. Let’s hope we see more like this in production soon.

Bikes as part of the mobility show

It wasn’t just cars. Bikes and e-bikes are a key part of the new mobility landscape as evidenced by the sheer number at the Munich event. Businesses need to start thinking about how ‘active transport’ – such as cycling or walking – can play a part in an inclusive mobility strategy; one that can be embraced by all employees.

Beer time! Well, when in Munich…

After all that, there’s just nothing left but to have a beer, a snack, a chat and to reflect on all these mobility options under the shade of some green trees. And what better place than in Munich – cheers! 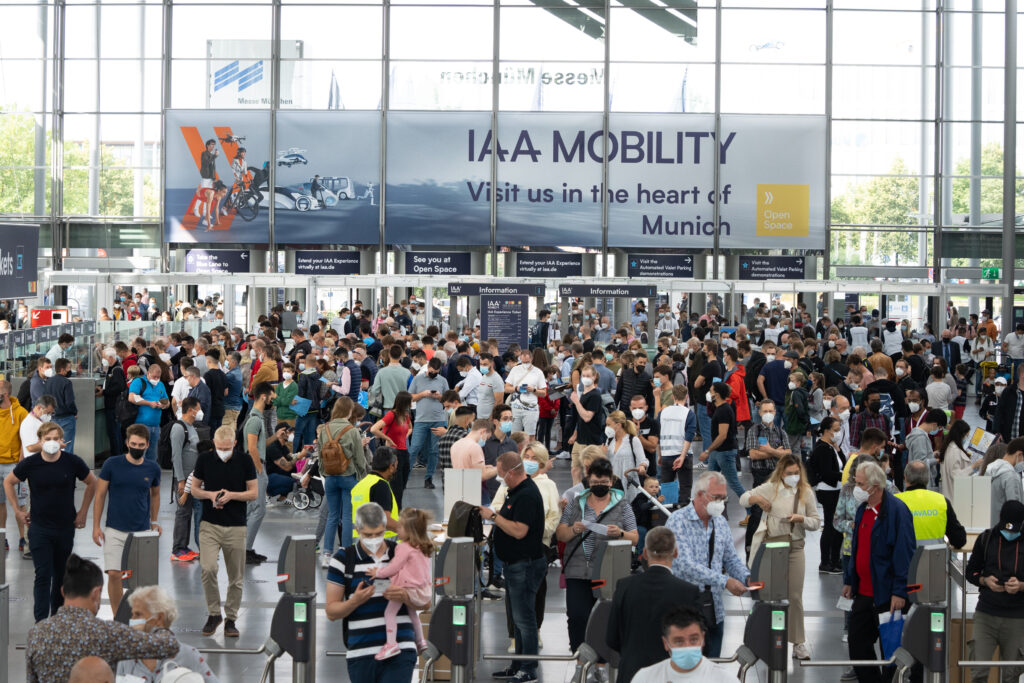 In my last blog – Green – what does it mean? – I talked about the issue of mobility and how it will relate to fleets in the future. Over in Germany, there’s been an exhibition examining just that. Called IAA Mobility 2021, it was based in Munich and featured everything from the latest in … Continued

Good news. We’ve been shortlisted in the Green Initiative Award, run by trade title BusinessCar. It’s the first time we have entered the award, so getting on the shortlist is terrific. Step one completed, then; step two – winning, against some stiff opposition – might be more difficult, of course… So I’m very pleased, but … Continued

Salary sacrifice as a method of acquiring vehicles is rising in popularity, as it often does when the taxation environment is beneficial. And at the moment, it’s particularly beneficial for zero-emission vehicles, with benefit in kind rates from 1% and then rising to just 2% until 2024/25 tax year. This rise in popularity was reflected … Continued

The Olympics, that fabulous cauldron of national contests every four years, has had a bumpy ride up to its Official Opening Ceremony (Friday 23 July 2021). Delayed a year thanks to the pandemic, yet still dogged by coronavirus that will see the athletes performing to empty stadia; a Japanese nation distrustful of so many athletes … Continued

It appears yesterday was the day marked ‘Decarbonisation Day’. Governments both here and the EU made far-reaching and important statements about the environmental challenge we all face to reach net zero by 2050. In the UK we know the route for car and van fleets has been well-signposted: 2030 sees the ban on new petrol … Continued

We’ve made a start on sustainability. But, hey, has it thrown up some difficult questions. Questions that we did not envisage when we began. The start we have made is around our commitment to a managed fleet of zero emissions vehicles by 2030 having joined EV100, the organisation representing businesses globally that have committed to … Continued

Rather than rely on single-source funding for reducing fleet administration, there are significant benefits from choosing panel funding through a single supplier approach, which not only provides significant fleet cost savings, but the administrative efficiencies of a single-source fleet management company suggests Rob Wentworth-James, Corporate Sales Director at Fleet Alliance. How does this really work … Continued

Coronavirus: it may not exactly be on the run yet, but a rapid vaccine roll out has turned the UK around, from being a prisoner of the virus to one beginning to embrace social engagement once more. But how has the pandemic affected your business? For some it’s been a case of retrenchment and survival. … Continued

Imagine this: you drive a zero emission car, so you’ve eradicated local pollution issues. Good. All positive. Then add this capability: the ability to suck up and ‘clean’ air pollution as you drive. Hold on, what….? In my mind it’s a bit like drinking beer and having a filtration system that ensures you don’t wake … Continued