Changes in Vehicle Excise Duty which come into effect from April may cause many companies to re-assess the mix of vehicles on their fleet in the light of the new charges.

Chancellor Philip Hammond announced in November that all new diesel cars from April 1 this year will face going up a VED band if they fail to meet the latest Euro 6 standards under real-world testing.

New cars will have to meet the real driving emissions (RDE) step 2 test that forms part of the current EU type approval process. To avoid going up a tax band new cars can pollute no higher than 1.5 times the current 80mg/km NOx limit under real-world driving conditions.

According to the Treasury’s estimates, less than two million cars will be subject to the VED band jump, though cars like the Ford Fiesta are expected to see a £20 rise in the first-year VED rates. Higher polluting models, like the Porsche Cayenne, are expected to see their first year rates go up by £500.

The changes only apply to new diesel cars, not vans, and do not impact the new £140 yearly fees all cars have to pay after the first year.

Any car failing to meet the Euro 6 standards in real world testing would move up a band, and thus pay anything from £15 to £560 more in first year rates. The new diesel rates are as follows: 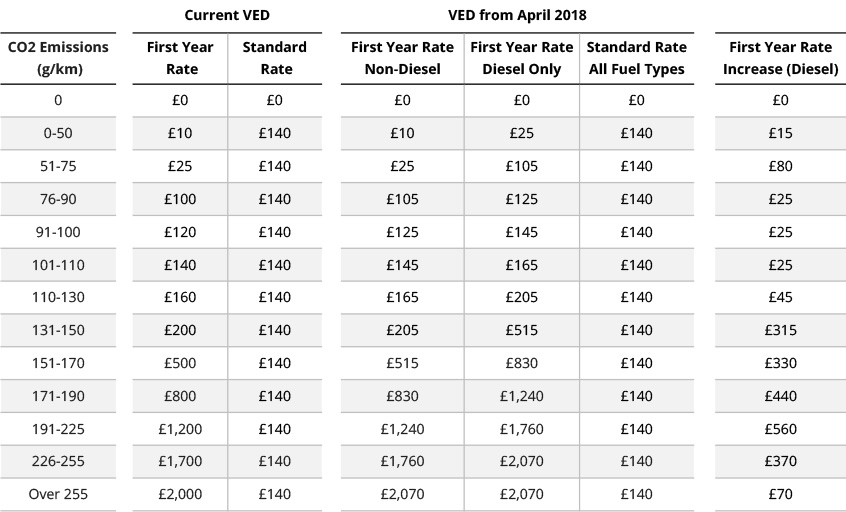 Under the current VED system announced by then Chancellor, George Osborne, in the Spring Budget of 2016, new cars registered after  April  1 2017 pay a one-off tax charge for the first year, based on their carbon emissions,  in a CO2-based tax band system.

Compared to the pre-April 2017 tax bands, most drivers will have seen their first-year tax charge increase in the current 2017/18 year, with only zero-emissions vehicles paying nothing at all.

From the second year of ownership onwards, the CO2 scale becomes irrelevant, as two flat rates are then applied – a £0 VED rate for zero-emission vehicles only, and a flat annual rate of £140 for all other cars.

However, cars costing over £40,000 are also liable for the £140 VED rate from year two and will also be forced to pay an additional annual ‘supplement’ of £310 for five years, a total of £450 a year. Once the five-year period is over they revert to the £140 flat rate.

It’s important to note that the current tax rates only apply to new cars registered after 1 April 2017. Cars registered before that date will continue to pay the old rates.

As with the introduction of many new schemes, there are winners and losers across the board. When it was first announced, many commentators queried why Ultra Low Emission Vehicles (ULEVs) are now subject to VED, rather than being incentivised with a zero rate as before.

For example, non-diesel ULEVs emitting less than 50g/km of CO2 will from last April pay £10 in the first year of registration and £140 per year thereafter. Previously, they paid no VED at all.

Meanwhile,  non-diesel cars emitting 91-100g/km, also previously zero rated, are charged at £125 in the first year, and £140 thereafter, an increase of £405 over the first three years of the vehicle’s operation.

“The new VED rules make fleet policy planning and selecting the right mix of vehicles for your fleet more important than ever before,” said Fleet Alliance managing director, Martin Brown.