Alternatively fuelled vehicles (AVFs) gained their highest market share yet in the fleet market in May as businesses continued to increasingly turn away from conventional petrol and diesel engined models.

Combined sales of AFVs into both fleet and retail sectors grow by 36% to 11,240 units, accounting for a record 5.8% of the total new car market.

Plug-in hybrid cars were the biggest driver of growth, said the SMMT, and were up 72.7% on May last year, while hybrids increased by 22.6% and zero emission battery electric cars grew by 18.7%.

Business registrations were also down for both May and the first five months of the year, recording falls of 9.6% and 16.2% respectively.

Private registrations were up 10.1% in May, helping to push the overall market to a 3.4% rise – its second consecutive monthly rise – but were down 5.7% year-to-date, with the overall new car market down 6.8% for the first five months of the year.

Mike Hawes, SMMT Chief Executive, commented: “May’s growth, albeit on the back of large declines last year, is encouraging and suggests the market is now starting to return to a more natural running rate.

“To ensure long-term stability, we need to avoid any further disruption to the market, and this will require sustainable policies that give consumers and businesses the confidence to invest in the new cars that best suit their needs.

“Fleet renewal is the fastest way to improve air quality and reduce CO2, and this applies to hybrid and plug-in technologies as well as the latest low emission petrol and diesels which, for many drivers, remain the right choice economically and environmentally.” 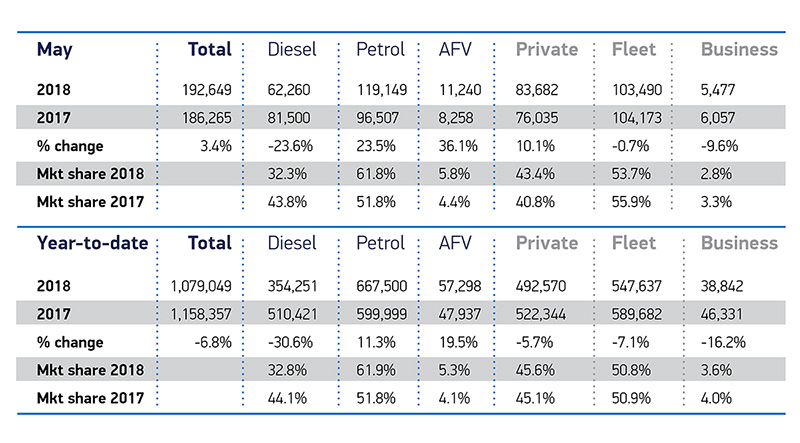 The Nissan Qashqai remains the best selling SUV with sales of 4,956 in May and some 26,127 in the first five months of the year.