Perhaps I’ve undervalued hybrids. Perhaps I’ve been guilty of not considering what engineering updates can bring to the technology.

But I am open to reconsidering my opinions. And right now I’m reconsidering the role of hybrids to deliver lower fleet CO2 emissions as the clock runs down to 2035.

As a company, we are committed to changing the fleet we manage to zero emissions by 2030 as part of EV100, an organisation that wants to normalise electric vehicles (EVs).

So I was hugely pleased that the Government decided to ban combustion engined vehicles – those cars driven solely by petrol or diesel – from 2030.

I was slightly perplexed, however, by the nod to hybrid vehicles that have been allowed to continue beyond the cut off date until 2030, provided they could travel a substantial distance in zero emission mode. Quite what that distance might be has yet to be quantified. But the inclusion was unexpected.

Why? What’s behind the pivot?

Certainly hybrids, and particularly plug-in hybrids, have a crucial role in helping drivers make the move towards an electrified future. In the case of hybrids, the self-charging variety – this is very much the case for drivers that do not have access to home chargers and where street charging facilities are limited.

A good example is Toyota’s executive Camry saloon. Toyota is already a master of all things hybrid, thanks to refining the concept with its Prius model and the technology is now widely available across the brand’s model range.

It’s illuminating to compare it with the smart, and established German premium executive, the Audi A4 diesel, which I’ve done in the table below: 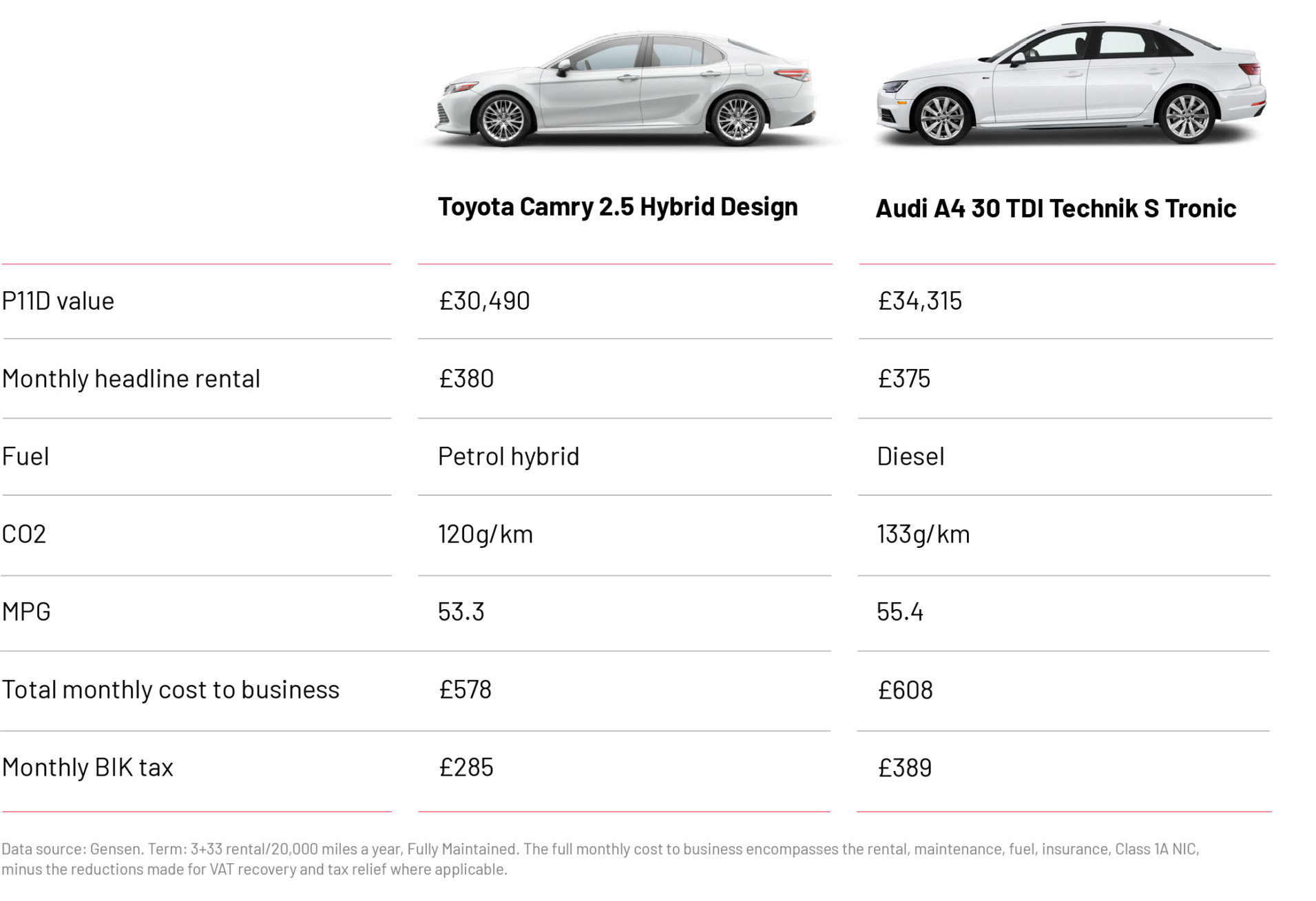 While the Toyota has the premium German beaten on P11D, the Audi is better on the monthly rental and marginally better on fuel economy. But after that, the hybrid Camry has the diesel beaten, not only on CO2 emissions, but the full monthly cost to the business and, just as importantly, the driver benefit in kind taxation. So cars like the Camry make a strong case as a good ‘stepping stone’ on the road to zero emissions.

But, some of the very latest hybrids appear to be taking the tech further than just matching diesel fuel economy.

Renault has recently been very busy electrifying its complete range, whether that’s plug-in hybrids or new E-TECH hybridisation. And there’s still the promise of a new full electric vehicle still to come.

Renault says its E-TECH hybrid programme is the result of its work in Formula 1, and it certainly provides the latest Renault Clio supermini with some impressive stats to fire it off the grid. There are two electric motors,  a 1.6 petrol engine and a small battery all of which play their part to power the Clio along, whether that’s zero emission or not.

It’s all the more impressive for combining all the tech in a supermini while increasing the weight of the car by only some 10kg. The result is over 60mpg, and CO2 emissions of 98g/km.

Perhaps deeper insight into the Government’s change on hybrids comes with the news of the all-new Nissan Qashqai’s hybrid powertrain. Due to be built at the Nissan plant  in north-east England, the new Qashqai features what the company calls e-POWER.

Neither fully electric, nor a range extender, the new Qashqai delivers an electric drive via a battery that’s constantly charged by a small petrol engine. Unlike other hybrids, the engine plays no part in delivering power to the wheels; drive comes from the electric motor. However, while the petrol engine acts as the battery generator, at times it can deliver extra power directly to the electric motor when required for extra acceleration.

The result of this hybrid technology is that the driver gets the full electric drive experience – all that brilliant linear acceleration – without ever worrying about running out of charge (unless you fail to fill up with petrol of course!).

It’s all brilliantly clever, and remains slightly under wraps. Nissan has released the first pix of the car undergoing testing and some outline details of the hybrid system. But, apparently, Nissan executives are so confident about the e-POWER system they feel it negates the requirement for a plug-in version.

If that’s the case, and the emissions and running costs stack up, the new Qashqai e-POWER hybrid will be a highly significant car indeed. I look forward to understanding more – and readjusting my opinions on hybrids.