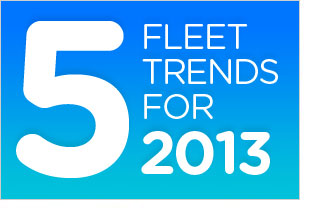 Are we all back in our driving seats, so to speak?

The Christmas and new year break is always a good one, but the first week back is always something of a slog.

But with that behind us, and the immediate issues of implementing Q1 strategies immediately before us, what faces us in the future in terms of fleet?

I’ve been consulting my crystal ball for the top fleet trends for 2013. And these are my top five: