Five blasts from the past and their green contemporaries 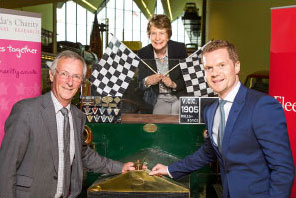 This weekend Fleet Alliance is delighted to be supporting the RSAC Three Lochs Classic which takes place on 17 August.

Organised by RSAC Motorsport, the classic car rally features around 100 cars dating from the early 1900s to 1982. And Fleet Alliance is the title sponsor of the event, the first time we’ve had the pleasure of being involved.

Beginning from the Royal Northern and Clyde Yacht Club in Helensburgh, which lies on the north shore of the Firth of Clyde, the rally – as you might expect given its title – takes in the three Lochs of Loch Lomond, Loch Long, and the Gairloch.

The route also includes the famous Rest and Be Thankful hillclimb, which ran events from 1906 to 1969 until lack of funds for improved safety provision saw its sad demise.
So while the rally cavalcade will follow in the wheel tracks of such famous competitors as Raymond Mays (ERA), Dennis Moore (Alfa Romeo), Ken Wharton (Cooper), Tony Marsh (Cooper) and Peter Boshier-Jones (Lotus-Climax), the pace up the climb will be rather more sedate.

Now you might wonder what a modern fleet management and leasing company such as ours is doing getting involved with a classic car rally.

Well, there are at least two reasons, one of which is to support the event’s charity – Darlinda’s Charity for Renal Research – and the other is to mark the progress of the motor car and the significant cars that have enabled personal mobility.

Our business is about managing cars, reducing running costs, enabling greater choice, and – perhaps most important of all – reducing the impact of the car on the environment by helping companies and their drivers with low emission car choices.
Over the last five years we’ve managed to reduce the collective carbon footprint of our clients by 7 billion grams – that’s the equivalent weight of some 16 fully laden jumbo jets!

And we shall continue with our green agenda to drive down emissions as new technology emerges that helps deliver even more efficient and even greener cars to fleets.

But what has been the progress over the years? To provide a ‘then as now’ snapshot of how far that technology has moved on I thought I’d pick five typical contestants of the rally to demonstrate the brilliance of the original and the enormous strides technology has taken to green the car and make transport so much more efficient. So here goes:

Modern technology often leaves me pleasantly surprised – I’m still astonished at what the car industry can do – and pleased that we can help our customers further green their fleets by offering these choices to the fleets we manage.

But next weekend, I’ll be paying homage to those technological pioneers of the past on the Three Lochs Classic.

Now where did I put my driving goggles and gloves? James! James….